Went out to Pilot Knoll area like I did last Monday and did not have the same luck.

Was able to net 5 large gizzard shad and a few threadfins on the ramp. Was way more than I would need. Fished for 5 hours from the yak and not one bite! Was fishing all around shad and schools of what I think were small sandies...almost sure thats what they were. Used the tails, the heads, fished them on the bottom and then suspended them just off the bottom and not a sniff.

I did catch some bass though on square bills AND I did getg ONE catfish... also on a squarebill! Water was 88-91 degrees and I fished from 10 to 18 FOW.

Anyone have any suggestions? I was thinking about next time going up toward Hickory Creek and fishing that flat where the creek comes in? Really dont know. But man I want to get this down! 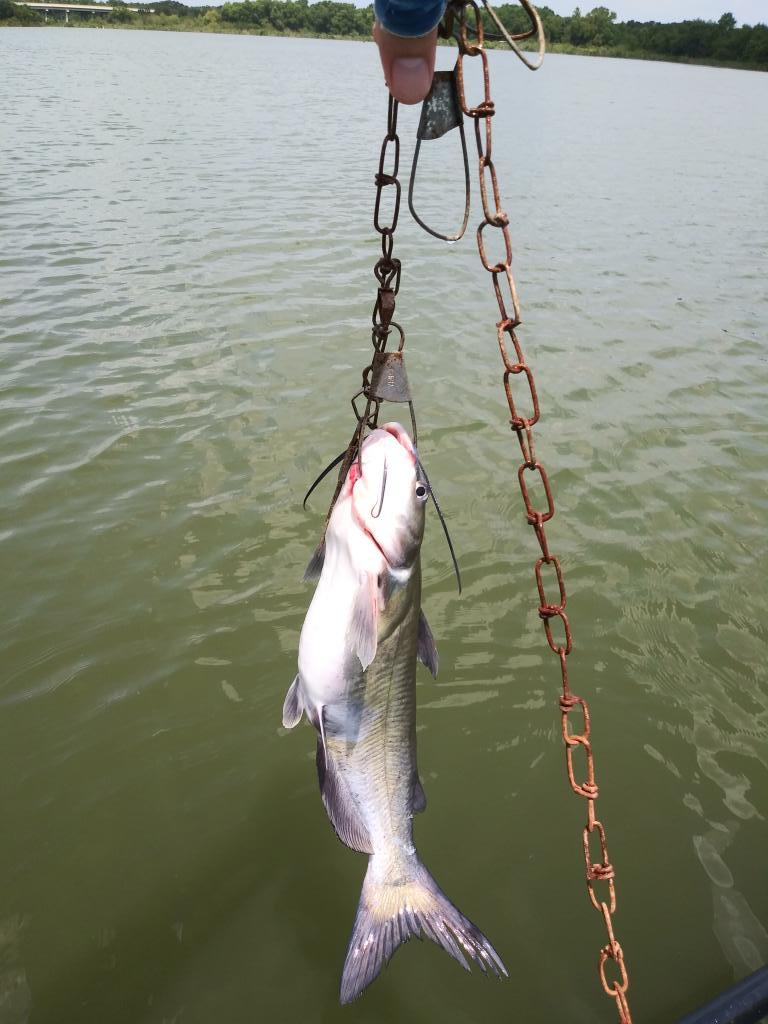 We been marking most fish in 30-35 ft on Lewisville. They can be pretty much anywhere on any given day but you can increase your chances of finding hungry fish if you focus your efforts on ambush points. There is a thermocline in a lot of the lake so you have to pay attention to your graph and stay out of it or above it. Seeing most numbers of fish on 30 ft deep flats next to channel but they just weren't feeding last 3 trips. We been able to catch fish on structure that is next to the channel every trip though. This time of year the fish are usually grouped up into 5-10 acre schools of all species chasing large groups of shad. I tell guys that when your graph lights up like a Christmas tree and your thinking to yourself what the hell is all that? Your in the right spot! You can catch 40-50 even 100 blues when you find em but we just haven’t been able to locate them like that this summer. We been catching 10-20 fish per trip but I been workin my tail off just to find a fishable pattern. Just ask my buddy littlefeather! We went all over the lake to find a group that was feeding. I’m sure somebody on Lewisville is hammering them blues, just not anyone I know! For them to really group up and feed hard you need at least 10mph wind. Just enough to get the lake chopping. Just enough to make kayaking a pain in the ace for ya Dan! Lol. Around the middle of September I can give you some guaranteed spots to catch fish but right now it’s pretty much all graphing for me to find em.

Thats good info and kind of what I figured...too shallow overall. You would think I could run into a mess of channels though. But not so much there either.

Last week was unique. That storm rolled in, wind kicked up, temp dropped 10 degrees and it poured. That fired them up! Those fish were way back in Pilot Knoll in like 15-18FOW I cant imagine they swim 5 miles to get to 30 feet and then cruise on back shallow. I think next week I am going to try a new spot. One someone told me about when I first started this mission to catch giant cats from a tiny boat few years back.
Posted By: Dan90210 ☮

I look forward to hearing more about these magic fall spots!

And of course getting towed out and fighting a 60lb out of the yak. Freaking epic.
Posted By: 🌊El Gato Azul🌊

More of a late summer area Dan. I think of it as a giant staging area the fish like to congregate in as the shad and fish get ready for the September and October rains to roll through.

Ima throw you a bone Dan...next time you fish with a SE wind, put your Yak in at Lake Park and paddle out to Hobie point in around 25 ft and start your drift. Drift across all those little fingers along that shore line headed towards Lake Park Point. Those fingers and humps hold some fish year round. You can also paddle out to Pockarus hump from Lake Park. Tons of yak fisherman around those area but they are chasing sandbass. Good luck amigo...Bluecatn ain’t easy!

On Lake Livingston, drifting with slip bobbers at 12-15 feet was successful on this Sunday. We have gotten 5 blues for two hours. I think it was slightly upper thermocline.
© 2020 Texas Fishing Forum