Many add the word artificial before the word lure which has been handed down from the fly tyers of old. Imitations of insect patterns has survived for over 100 years by those diehards that believe trout at times will focus primarily only on certain nymphs, hatches and other seasonal bug species. But anglers have so many lure designs to chose from that the word doesn't/ can't apply. It's like saying your casting an artificial spinnerbait or artificial crankbait when you say you're casting artificial lures. Lures are real - period, whether a skirted jig + trailer or a Chatterbait. If anything, the general label I would use for all lures is creature X and move on from there to specific lure types.

I, like most (elderly) anglers, remember when lures were advertised as minnows or frogs or some insect larvae. But yesterday I happened to be watching a Power Grub I copied from a mold as it was swimming back to me while being retrieved at a steady pace. Until that moment I thought - fish - because it looked like a fish with its tail wagging back and forth.Soon after that I happened to watch a water snake swim from one shore towards me and watched its tail and body action. Dang! if it didn't hit me - curl tail grubs and worms resemble snakes when retrieved - not fish! Regardless, I've caught many fish of all species using curl tail grubs and worms, never choosing them for what they represent to a fish but simply because they catch fish mostly related to design, size and mostly action/ presentation in combination.

So when I say I'm catching fish on a Spoon Minnow (a creation of mine using a tablespoon as a mold), it has nothing to do with what it looks like but more to do with how it moves and its shape (even though it does kind of look like an artificial minnow - and even swims like one to boot! )

That's true. Maybe we should follow the taxidermist and cal it a " Bait Replica".

It sounds like you try to look at your bait from a fishes eye as I do. When I was much younger I did some scuba diving in a couple of lakes that were very clear at times and abundant with all species of fish from the area. That gave me a pretty good perspective of how different water conditions effect how things appear under water. I'm never ready to fish a new bait until I can get somewhat of a look at how it looks and moves in the water.

Way to go Sam. You should put in for a consultant job with one of the bait manufacturers.

I like the term replica. Funny though, but much of what are sold as replicas or imitations aren't either. Like you I concentrate on what the lure looks like as well as how it acts in the water. These were recently tested in my pond at my feet: 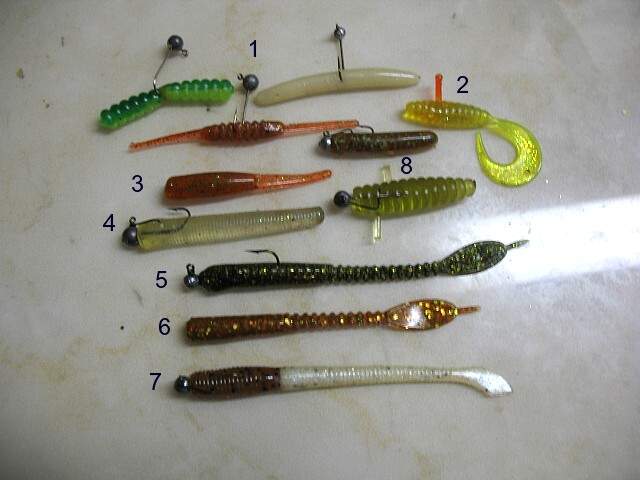 The water is semi-clear down to 4.5' and allows a good look at what the lures look like rigged on different jig head weights from 1/64-1/16 oz. Different presentations make them act different, but regardless of how rigged, all of the lures can catch most fish species on the same water on the same day.
The actions of each are different but provoke fish to bite equally. What this proves is that:
1. color variety is optional
2. different size, shape and action choices are huge but within the limits of seasonal effects, competition, fishing pressure, etc.
3. Replicating a live animal - no matter how good a copy - is wasted on fish that have only their senses to go by. Their simple brain knows only on or off / strike or let it be.

The challenge is discovering more lure designs/ modifications fish are provoked to strike when possible. I love the ever increasing lure variety I can catch fish with that I don't have to go broke paying for that which may look good in the catalog or on the rack but that are ignored by fish. The photo illustrates that not all grubs nor mini-sticks nor plastic worms work equally well. Design always matters.
© 2021 Texas Fishing Forum