What do you pro crappie guys think

Went to my local creek that’s a mile away from my house and have been doing pretty good jigging lay downs. After the cold front and rain water temp in creek this morning was 63 then warmed to almost 70 by 3pm. I started fishing my regular spot with minnows and bobber but nothing so slow trolled the creek with livescope. Nothing was on the brush just massive wads of smaller crappie in open water about 6ft with a few bigger ones hanging out below. I was chasing the school up and down the creek prolly caught 15 small ones to every keeper using roadrunner with tuxedo black joker casting out 20ft then slow retrieve. Im going back out tomorrow but my question is are they just moving back in looking for a place to finish up the spawn?Half still had eggs. 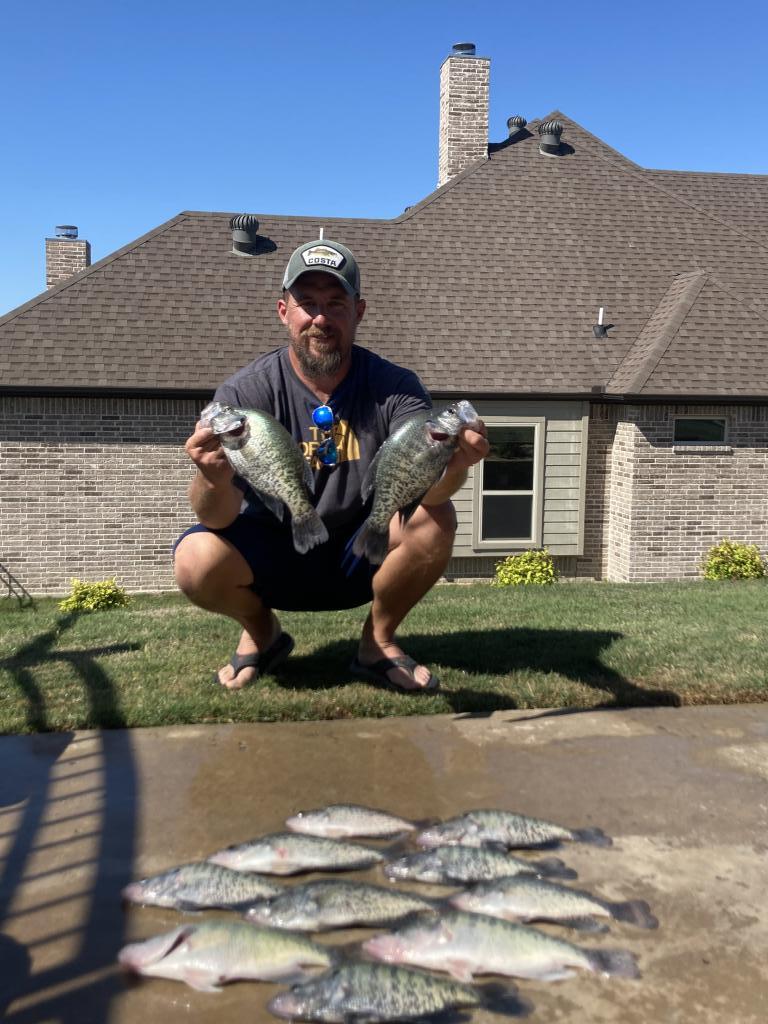 Yes they are spawning and it looks like you found the honey hole! I see at least 5 males in the photo so it looks like a good mix of male / female fish = good spawning area. Nice catch!
Posted By: Fishbonz

I`m not a Pro by any stretch but I`d say the fish in your area are still in their spawning pattern and will probably have another push of egg layers with the next full moon cycle if mother nature cooperates. Beautiful fish JSouther

HE aka Fishbonz
Posted By: Jezreel

Originally Posted by Fishbonz
I`m not a Pro by any stretch but I`d say the fish in your area are still in their spawning pattern and will probably have another push of egg layers with the next full moon cycle if mother nature cooperates. Beautiful fish JSouther

Ahhhhhh. . . Don’t sell yourself short. I hear your held in high regard at the Lake with Two Names!

Originally Posted by Jezreel
Originally Posted by Fishbonz
I`m not a Pro by any stretch but I`d say the fish in your area are still in their spawning pattern and will probably have another push of egg layers with the next full moon cycle if mother nature cooperates. Beautiful fish JSouther

Ahhhhhh. . . Don’t sell yourself short. I hear your held in high regard at the Lake with Two Names!

Jezreel sometime even a blind squirrel will find ......well you know

I will need the depth, location and water clarity to assess your situation,,

your doing great man, you may be thinning them out. ha , , fish tend to move alot in creek and river systems,, they are following the bait around,, find the bait, find the fish.. they may leave that creek to spawn in the main lake and are in there mostly to feed. If they disappear completely, find some cover or structure right near the mouth of the creek and try there. if no bueno, find the first signifigant depth change out from the mouth of the creek. if theres a small drop off, a foot or two breakline, they may spawn right on the drop off. they dont always spawn on cover if the bottom is right.. dont be afraid to try depths all the way to 16 feet. the first thing u may think is they have spawned and are recovering now,, then when u clean them, u will see they are still egg laden.
Livescope is proving what ive been saying for years, many fish spawn deeper than most would believe. I see many people using livescope, catching crappie on deeper cover, and they STILL dont get it.. the old myth that they are moving in and out, and staging is so engrained in thier minds, from generations of people repeating the same myth, they cant get past it. Most of the crappie will move out deeper to spawn, this is why they just seem do dissapear in a day or two,., gone.. now think abt it, if they were spawning in these shallow locations, and the females went in on a full moon night , dropped thier cargo, and went out deeper to recover, shouldnt the males still hang around for alot longer to gaurd the beds? they are gone too.
the theory of the crappie moving in and out of spawn areas due to cold fronts is not due to the water temp change causing them to leave , they are following baitfish schools in and out, that are very sensitive to temp and barometric pressure changes.. shad are very delicate and sensitive to water temp fluctuations and water nutrient content, and oxygen content , thats why they are almost always on the move. crappie are not affected much by water temp changes. they can spawn in very cold conditions. a study was done years ago, on how crappie adapt and react to cold water conditions, and they are one of the most adaptive and resilent freshwater gamefish around. they have a unique ability to self regulate thier internal temp even though as a species they are considered cold blooded..
My advise would be, only consider water temp in terms of where the baitfish will be. in winter, shad go deep and crappie follow. at around 50 to 54 degrees the shad die. also pay attention to cormorant, gull and tern locations as well as where the wind blows plankton into during the day. the shad will hang around those areas in deeper water, and move in at night to feed. the crappie will follow, and stage right near those areas the next morning.
Posted By: Mckinneycrappiecatcher

Water temp is everything with spawning crappie, and at 63 degrees, they’re probably far from being done spawning. Usually I see the spawn start to taper off big time when water temps hit 75-78, then you’ll have a few stragglers, but most fish are in brush. At 65-70 you’re at peak spawning conditions.
Posted By: JSouther

Thx leanin post that is some good stuff!
Posted By: Whaler-170

Thanks leaning post, I enjoyed reading that!!!
Posted By: bighouse161

Thanks Leaning Post; a very good read and well worth it for us novice crappie chasers. Reach one, teach one!
Posted By: fishin'aholic2

I'm not a pro but just because the fish have eggs, it does not mean they are still spawning. Some fish retain their eggs (Alot more than people realize) and will not drop them. With this being said I see fish spawn well into June on some lakes around here.
Posted By: Laner

Looking at where you're from, and knowing how I've been doing on the lakes around this area, I would suggest getting out of creeks and into the backs of main lake coves. We beat them up pretty bad under a bobber the last couple of days, but we were a long way from any creeks.
Posted By: leanin post

Originally Posted by fishin'aholic2
I'm not a pro but just because the fish have eggs, it does not mean they are still spawning. Some fish retain their eggs (Alot more than people realize) and will not drop them. With this being said I see fish spawn well into June on some lakes around here.

yes I agree, and I believe many of the smaller females are the ones who do not drop their eggs. maybe its a stress thing, or natural biological process, dont know why. maybe just a natural balance in the overall scheme of nature, if all female fish dropped all eggs ever year, certain species would overun the lake., just think if garfish took over a lake., would not be good.
Same with humans, if a woman got pregnant every time her eggs were developed , you would be swamped in young uns,.,., lol
Posted By: leanin post

one of the very first things that changed my way of thinking on crappie locations in relation to water temp was initiated many years back, watching the late great Mr,Charlie Pack shows on tv. A talented fisherman who knew lake waco like the back of his hand. fished it for probably 50 years.
On one of his video guide trips, they were fishing a creek on waco, hog creek I think. They were having a very tough day. The guidee asked him, shouldnt they be here Charlie, the water temp is 70 degrees, and he answered yes, they should be here.,,. BUT THEY WERENT,
This got me thinking,, So I started going to all of the warmest areas on all of the lakes I fish, documenting water temp and fishing,,
After years of doing this experiment, I found it is not true,.
The warmest areas tended to either be too clear, or too muddy. so I totally started ignoring water temp. and instead searched out the best looking water areas in lakes and creeks. not too clear, not too muddy, and definitely not polluted with tiny wood particles from the rotted wood that comes from trees on banks during flooding conditions,., this can actually drown fish, because they cant process the water thru thier gills., they either leave the area, or if its deep enough, get under the debris line. I look for areas where the water is not stagnant, but not getting violent wave actions due to late northern winds from fronts. Crappie want nutrient rich. oxygenated water, with moderate stability, and suitable cover or structure to spawn on.
Once I changed my way of thinking abt the spawn process, my success dramatically increased.
another realization is depending on wind, flooding, water clarity, ect, ect, they can spawn in different locations every year.
Many people go to where they caught some last year, they are not there , then automatically go to the old excuse that, well I must have missed the spawn, its over.. in reality they may be spawning out in a cove 50 yard from where your fishing and you drove right past them on your way out disappointed because " you missed the spawn".
Posted By: leanin post

Originally Posted by bighouse161
Thanks Leaning Post; a very good read and well worth it for us novice crappie chasers. Reach one, teach one!

I always want to know the WHY... I have a plaque that reads,,,, WISDOM BEGINS WITH WONDER!!!

I have a cousin who runs a vitamin and supplement store in cajun country, Eunice louisiana., every time we visit, he would try to sell me vitamins and supplements.,,. I would ask him, how did they work, why did they do what they supposedly did.,
His answer was,, its not the why that matters, its the IS that matters.. ha
Not my way of thinking, human curiosity is one of our greatest attributes.

This is the same reason that im trying to develop a different design of the jig hook that has been used for 50 years, but is totally wrong for the way it is used. Why are we still using a jig hook that caused the line to ride up on the eye, causing the jig to sit at a 45 degree angle in the water column, turning off half of the fish we put it in front of.. Everyone who is a seasoned crappie fisher knows that the crappie want the jig in a natural horizontal position. minnows dont swim tru or sit in the water column diagonally, ... everyone just accepted it as, they way it is one guy made them wrong, and everybody copied it.. alot of peoples way of thinking can be alot like sheep. one takes off running, and the whole herd follows,., they dont know why, but one did so they just run too.
Racehorses dont run with donkeys... be a racehorse...!!!!!
. Im going to change that.
See my post.. " The Stickle Hook' THE STAY LEVEL SICKLE HOOK.. TM
© 2021 Texas Fishing Forum