Spawning crappie techniques from the bank

I am going crappie fishing, during the spawn, from the bank. I was wondering what type of technique is best. Minnows under a bobber? Jigs under a bobber? Do you wiggle the jig some? Any input is appreaciated for this novice
Posted By: Blue Blazer 2400

Since you are fishing from the bank I am assuming you will be walking. If so, I would forget about minnows. It is a pain to carry a minnow bucket around. I would fish a jig and bobber. Throw it out let it sit for 15-30 seconds and they drag it a couple feet and repeat. Usually there is enough water movement so no need to wiggle the bobber. If there is brush close to the bank take a long rod and drop a jig all around the brush. If you catch one fish that area good, there is usually more.
Posted By: SenkoSam

Fish in your neck of the woods are going to be irritable and in different spawn phased - not all fish spawn at the same time, but crappie do school tight in the shallows in anticipation. Light jig heads 1/64, 1/32, 1/16 oz. plus soft plastic lure in any one of a thousand designs, cast a decent distance and can be worked slowly. Here's a Crappie Magnet grub added to a 1/16 oz jig caught many crappie the day it was used: 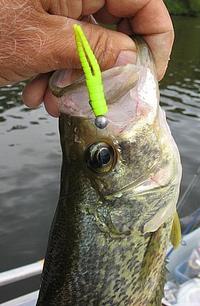 Hair jigs (in this case my dog's) also produce:

Here I cut off the parts of a Brush Hog and used the forward piece :

Beetle Spin and various grub designs should be considered:

Note the curl tail grub. It's been catching fish for decades with out without the B.Spin. In fact I caught a sunnie and crappie yesterday from the bank using one.

Even the claw off a bass craw lure caught fish: 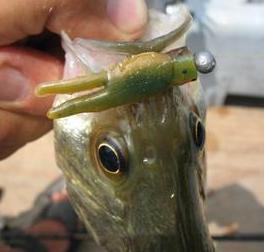 Now I wouldn't say not to use a float with lure hanging down, but IMO you want to cover water a bit faster by fan casting from shore as far out as the lure will cast. Make sure it goes down beneath the surface hopefully at mid depth.

But also consider this: any lure shown above is capable of catching most species of fish, not just crappie.
Posted By: Bassman_78

If you know the spot produces crappie and it’s not a hard or long walk, taking a minnow bucket along is fine and never hurts. As said above, a longer stick jigging cover you find. A jig under a bobber works for the places you can’t reach. It also helps keep you at the right depth for longer periods if you’re casting out. You can search with a jig or curly tail or whatever reeling very slow. You can keep doing this or switch to a bobber once you find em. You usually don’t need to work the bait much at all or any. Sometimes a slight wiggle/twitch works. But don’t overdo it. Good luck
Posted By: Grainraiser

Depends on what type of bank fishing your doing. Spawning crappie are typically 3 foot or less. I would use a jig and bobber if i'm casting to them. I would use a long rod if fishing in thick brush. You are simply probing holes in the brush with your bait when doing this kind of fishing. A 10ft plus long rod is a god send when using this method.
© 2020 Texas Fishing Forum