Salesmen and many fishermen claim that 2 livewell aerators is better than 1 aerator in the summer to correct any low dissolved oxygen problems?

I have read and heard that live bait and tournament fish need more aeration in summer livewells to fix low oxygen problems, a common summer bait and fish killer in livewells and bait tanks.

Given the same size container of water, two aerators (if you mean pumps that spray water) will circulate and spray twice as much water as one of the same units. The process does increase the amount of air bubbles that get mixed into the water, and there will be some increase in dissolved oxygen as a result. It has been a while since I studied the appropriate physics in the matter, but results are probably NOT linear - you aren't going to end up with 2X the amount of oxygen in the water, but it will be better. Consider this physics example: You have a boat with a 125HP outboard on it, and it will run 50MPH If you replace that outboard with a 250HP, you can probably rest assured the boat isn't going to then run 100MPH. This is the nature of physics.

Bait and fish do need more oxygen the warmer the water is, not simply because of the season of the year. This is because they are cold blooded, and their metabolism increases the warmer they are, likewise increasing their need for oxygen. I've seen some basic curves for this, but don't have any handy. At the same time the fish's metabolism is demanding more oxygen, there's an issue with their environment - warm water will not hold as much dissolved oxygen as cooler water. So you get a double whammy problem; higher metabolism caused by warmer water that holds less oxygen naturally to begin with.

The BEST thing you can do is cool the water in the livewell so that the fish's metabolism slows down, and the amount of oxygen the water will absorb goes up. In hot weather months, there's a limit to this to avoid shocking the fish. I've read to never drop the temp more than 30 degrees cooler than the lake, or a fixed temp of 70 degrees, whichever is higher, if memory serves me correctly.

You aren't going to make the water hold "42% oxygen" because there's nowhere in nature that the oxygen level is that high. Our air at sea level is only 20.9%. Nobody can convince me that spraying water through air will take oxygen present at 20.9% and turn it into 42%. Spraying twice as much water doesn't do that, though someone must think it doubles the oxygen it seems.

Oxygen dissolved in freshwater is measured in PPM (parts per million), not percentage, like we do for the air we breath. You have to do a LOT of spraying or bubbling to make even a small difference in oxygen PPM, though having multiple pumps, sprayers, or bubblers will definitely increase it, but not in a pure multiplication gain. In comparison, the right temperature could give you a LOT more gain with one pump that a warmer temperature with two, or even 3 pumps!

I lived in South Florida for 20 years, and never lost fish to anything other than bleeding. It's hotter there than in Texas! I had an aftermarket air pump with an extra large air stone siliconed to the bottom of each livewell. I used ice frozen in 2 liter soda bottles one at a time as needed to keep the water cool, with the cap kept on the bottle to slow the ice melt. I usually ran the aerator pump on a timer, selecting the run time by how much weight we had in the livewells. I was known to have feisty fish at weigh-in - they had enough energy they didn't want to lie still very well.

My personal opinions and observations: More pumps use a lot of energy for what you get from them, but two makes for a nice failure/backup option. Air bubbler devices give a LOT of bubbles all the way from the bottom of the livewell very efficiently for typically one fourth of the power required for a pump that just sprays water. This seemed to work very well for me in the past with attention to keeping the water cool. The "Oxygenator" isn't worth squat from the tests and reports I've seen. The systems that use an actual cylinder of Oxygen are probably good, but do require some higher expense, and keeping enough O2 in the bottle, plus under the back deck isn't the right place to mount an oxygen cylinder.
Posted By: Holzer

Unless you have one hooked up in a way to draw outside air and push it into the water that is being circulated, I don't see two aerator pumps making enough of a difference to go through the trouble of adding another pump.
Posted By: senko9S


I use one of these, work great and only 35.00 at academy. can run dual hoses or I use the T for a 2 into one and a long flexible bubbler in the livewell.
add some ice in summer and you won't lose fish. wire it in permanent with a fuse. 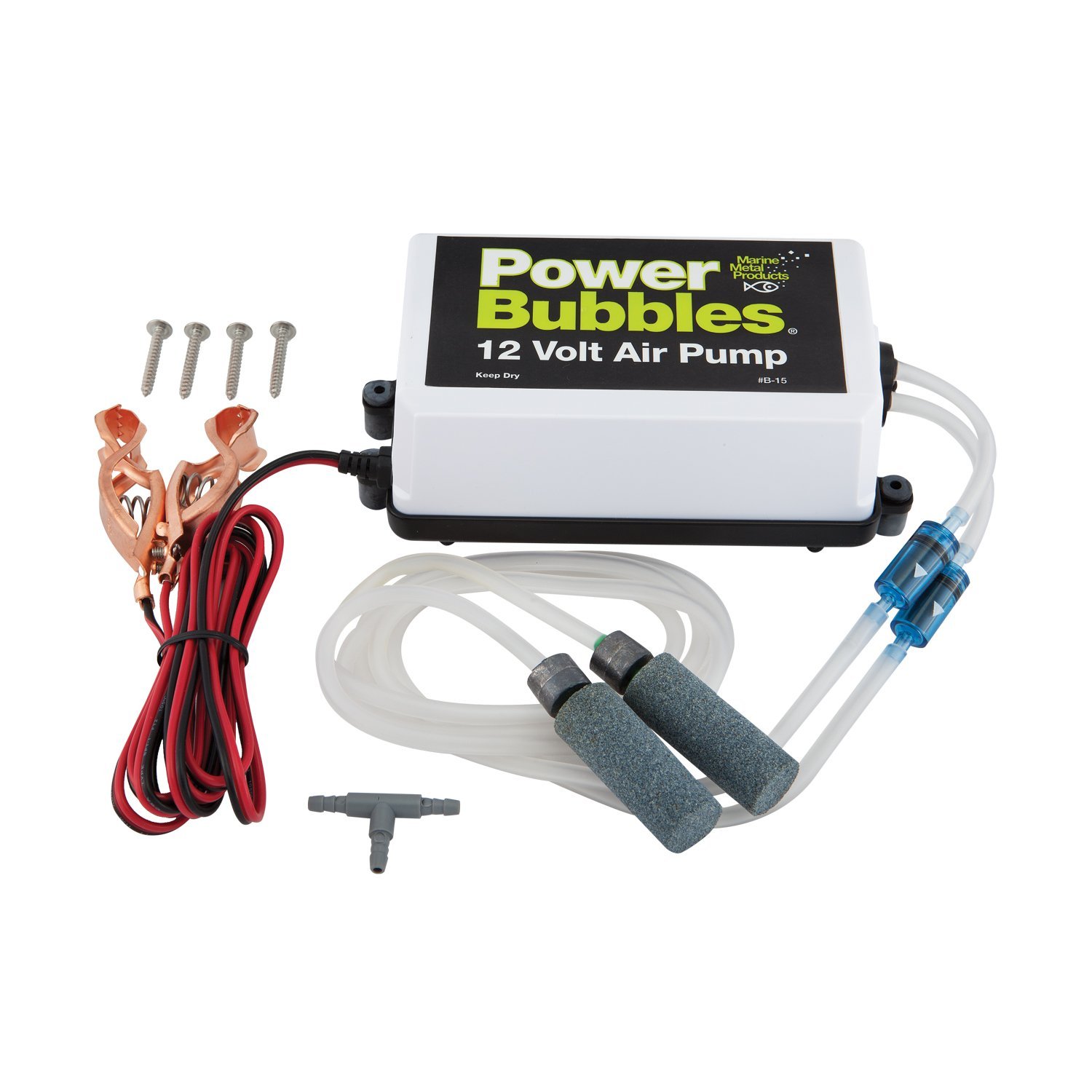 Thanks for all your interesting opinions, especially Flippin’s detailed opinion with a scientific twist.

Flippin says, “bait and fish do need more oxygen the warmer the water is, not simply because of the season of the year. This is because they are cold blooded, and their metabolism increases the warmer they are, likewise increasing their need for oxygen,” and he’s spot-on, the season is not the problem. Bait fish and game fish live fine in that hot summer environmental water.

What always happens when bait and fish need more oxygen in the livewell and the fisherman cannot or will not give them more oxygen?
I don’t personally know anybody that has ever claimed they had any problems with bait or fish actually dying in livewells in the summer, ever. I suppose that the only fishermen that do have problem in the summer overcrowd their livewells or cannot safely manage their water quality or both. A very small percentage of summer deaths in livewells result from physical abuse, lethal injuries, arterial lacerations or decompression issues. All can contribute to unavoidable kills for mature fish in summer livewells.

I have chilled livewell water in the summer with ice too like all of you. Initially, chilling livewell water seems to work better than not chilling environmental 85 F water down to 65 – 70 F seems great until the bait is netted, hooked up and cast into back into that 85-90 F water. That’s when I see things go terribly bad very quickly for the bait when that chilled bait hits that hot water… acute temperature shock is final the terminal stressor, the “coup de gras”. Guess all that excitement (unnatural overwhelming stress) from being netted, hooked, and acute increase in water temperature shock is just too much for the little buggers fighting for their life.
© 2021 Texas Fishing Forum